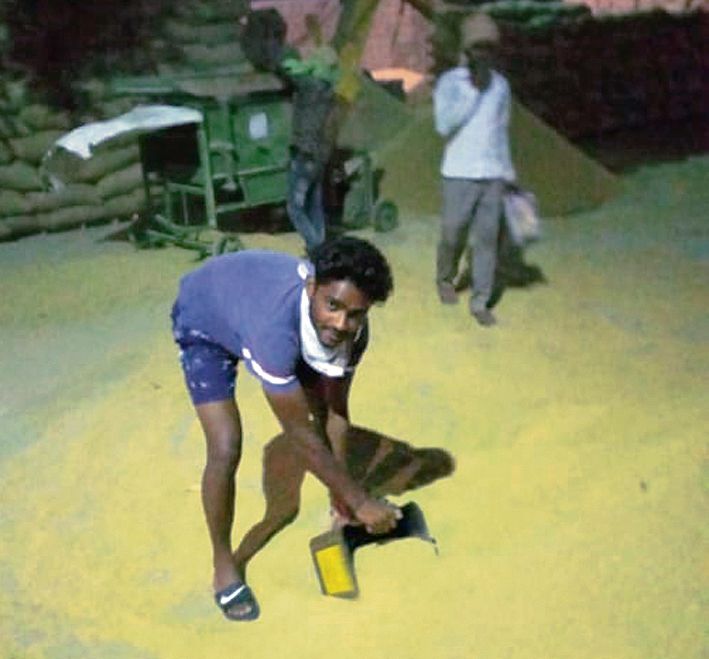 From being one of the top scorers of the third Khelo India U-21 Games to performing small-time labourer job, an 18-year-old ace hockey striker, Harpreet Singh, had never thought of doing anything like this out of desperation.

A former trainee of the Chandigarh Hockey Academy (CHA) and a Class XII student of Government Model Senior Secondary School, Sector 37-D, Harpreet is working as a labourer in two shifts to earn Rs800 a day and bring home bread and butter for his family.

He practises hockey from 4 am to 6 am before attending his first job of the day as a paving and surfacing labourer from 8 am to 5 pm. Later, he works as an unloading labourer at a local vegetable market or at local rice mills from 8 pm to 2 am.

Having played 11 nationals from Chandigarh and several local-level championships, Harpreet is one of the unlucky talents to skip the eyes of national selectors. He had scored eight goals to remain the highest scorer of the Khelo India Games held in Guwahati in January this year and was also adjudged the best player of the 2016 Nehru Cup.

A resident of Mangarh village in Amloh, Fatehgarh Sahib, Harpreet was inducted in the Chandigarh Hockey Academy in 2015.

“I don’t know how I skipped getting a call for the Indian junior probable squad. The more shocking was not getting selected for the Khelo India scheme. I was expecting to get some kind of scholarship to improve my hockey skills and help my family. But these were back-to-back setbacks,” said Harpreet.

His father works in a hotel, while mother accompanies him to paving and surfacing labourer job. “I work twice a day to earn Rs800. In Chandigarh, I get support from coaches and friends, but here I have to work to earn money. I don’t know if I will return to complete Class XII. If the hockey academy opens, I will surely be going to practice there. I was in similar situation in the pre-Covid times,” he said.

The ace striker said he was eager to comeback and join hockey training to get some kind of scholarship. “Playing for India is always a dream, but performing consistent is what I focus on. With the labourer job, I am not able to concentrate on my game. Mental stress and lack of diet are suppressing my body. I just wish to come back soon and find some place in the scholarship scheme. I don’t know if I will be able to pass my higher education,” said Harpreet. “I am unaware what went wrong with him. He is not made for working as a labourer. One should see him playing. He is natural but needed support or else he will end up as a lost soul,” said CHA coach Gurminder Singh.

Practises hockey from 4 am to 6 am

Harpreet practises hockey from 4 am to 6 am before attending his first job of the day as a paving and surfacing labourer from 8 am to 5 pm. Later, he unloads goods at a vegetable market or at rice mills from 8 pm to 2 am.

Similar topics
» Even owning paintball guns, used in games, needs a license in India thanks to Chaddis
» Tobatek Singh in India
» Khushwant Singh: The End of India as we know it
» Manmohan Singh did India a big favor by not resigning
» Statement of Manmohan Singh, Former PM of India, slamming NaMo

Page 1 of 1
Permissions in this forum:
You cannot reply to topics in this forum
SuCHat
Click here to find out who is on SuCHat.
Latest topics
» Blood pressure as we age: what is a healthy target (FB shared useful and informative short clip)
by Seva Lamberdar Thu May 19, 2022 8:51 pm

» The importance of taxes paid sufficiently and regularly to Govt. in doing its job well and providing good services and benefits
by Seva Lamberdar Fri Dec 31, 2021 7:00 pm

» Guaranteed MSP (Minimum Support Price subsidy to farmers) will claim half the Budget (The Hindu)
by Seva Lamberdar Tue Nov 23, 2021 9:02 am