A recent FB-post on the listing of (Maha) Puranas: 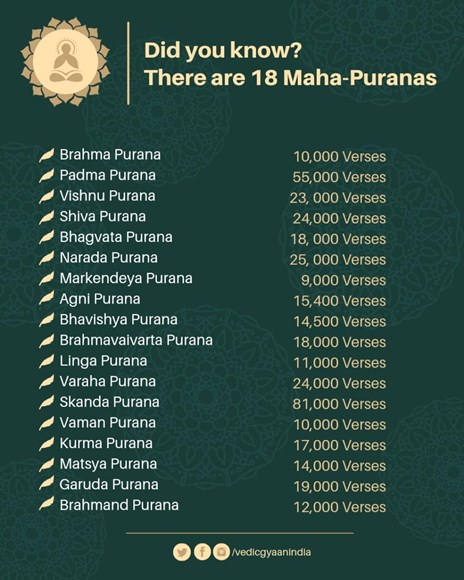 (1)  In addition to the basic and original Shrutis (Vedas) in Hinduism, there are other ancillary texts which appeared afterwards and are collectively known as Smritis or Smrtis  (including Puranas). While Shrutis denote ancient knowledge transmitted aurally and scrutinized thoroughly over time, Smritis may include the untested memorizations and historical records of later events and personalities, social customs and proclamations, religious matters and rituals, and folklores etc.  Smritis basically were intended to lend support to Shrutis or Vedas through explanations, examples and lessons on morality, rituals and customs etc. Smritis appear to draw extensively from the Vedas, Upanisads and Vedic (Brahmanical) philosophies (especially Samkhya and Vedanta). Smritis comprise various puranas (stories and tales related to creation and history), secondary texts on rituals, suggestions and proclamations on living and lifestyles, and epics (Ramayana and Mahabharata).

Since Smritis were not subject to the same type of scrutiny as Shrutis, they are not considered as having stood the test of time and there is no association of eternality or sanatana with them. They  appear to come and go, especially the latter (“go”) if a Smriti happens to be in disagreement with the Shrutis (Ref. 3). Moreover, unlike Shrutis which are considered valid sources of knowledge under Testimony or Shabda, Smritis are not automatically accepted as valid sources of knowledge under Testimony (Ref. 4). Note only when a particular Smriti is found in agreement with Shrutis or Vedas (Rig Veda specifically), it may be accepted as a valid source of knowledge (Ref. 3). Incidentally, Ref. (3) also gives details as to why Atharva Veda, in spite of having Veda in its name, is not a genuine Veda or Shruti. Similarly, Refs. (5 and 6) describe in detail how Manusmriti violates the Vedas and therefore is not a genuine or valid text on Hinduism. In other words, Atharvaveda and Manusmriti are bogus texts and they probably were created for spurious reasons by unknown persons who used the names of famous Vedic sages (Atharvan and Manu), perhaps to make their works (Atharva Veda and Manu Smriti) popular and acceptable to public.

Regarding the names for deity (deities) in Hinduism, there are many. Agni, Indra, Savitar, Vishnu et al. are all names used for Brahman in the Vedas (Shrutis). Moreover, all these names for Brahman reflect different Brahmanical (Divine) attributes and traits (while Brahman is one and the same -- Refs. 7, 8 and 9). Smritis (Puranas etc.) on the other hand seem to emphasize a separate identity / personality (e.g. god Vishnu, god Agni, et al.) to each deity, corresponding to respective Brahaminal attribute (Vishnu or Agni et al.) in the Veda. In other words, what appear in the Vedas as the different names for Brahman (Vishnu, Agni et al.), in Smritis (Puranas etc.) they seem to reflect separate deities or gods (Vishnu and Agni et al.). Moreover, the Puranic deities / gods (Vishnu and Agni et al.) are usually backed by separate puranas dedicated to them (e.g. Vishnu Purana to Vishnu). These puranas often have stories on creation etc. in the name of the deity whose name the Purana bears (e.g. Agni in Agni Purana). The original idea behind this type of individualization of Puranic deities (based on the names for Brahman in the Vedas) probably was to personalize Brahman in the Saguna mode. This way, according to the Puranas, the deity would probably acquire an important role in creation, corresponding to his / her name for Brahman in the Vedas. Moreover, personalization of the deity seemed to suit the needs and capabilities of devotees and help them in personal and symbolic type worship.

The individualization of deities according to the Puranas to help people in personal and symbolic worship of Brahman can sometimes be misconstrued as if various deities are unrelated and independent. This also results in the misunderstanding that there is a pantheon of independent gods and goddesses (Vishnu, Shiva, Krishna, Amba and Devi et al.) leading to polytheism in Hinduism. But that is totally wrong because all these deities, having different names and identities, represent only one God (Brahman). In other words, Hinduism is not polytheistic, but it believes in monotheistic polymorphism (one God having many names and representations). Note also that religio-philosophically (Refs. 7, 9 and 10) it is sufficient for a devotee to worship and believe in just one deity (Vishnu or Shiva or Devi, for example) because all the deities are represented in / by one Brahman.

Sometimes there is an overlap or duplication of stories about a deity or an event in the Smritis. For example, the story of Krishna is found in both the Bhagavatam and the Mahabharata. This perhaps is due to the fact that the former, a purana (Bhagavata Purana), looks at the life of Krishna from puranic considerations (Krishna as the deity), while the latter, an epic (the Mahabharata), takes a historical view (including Krishna’s role in the battle of Kurukshetra).

Smritis (Puranas and Epics) are sometimes also used to introduce and signify an Avtar (a new divine reincarnation or arrival). Avtar basically reflects a change in focus / perspective about the deity, mostly in Saguna mode and according to changing times and conditions (the Gita: Ch. 4 - V. 7-

. A new Avtar thus may be in the form of a new deity altogether or by having a previous deity undergo a kind of transformation (reincarnation) involving change in attributes. Vishnu reincarnating as Krishna according to the Bhagavatam (which contains stories and philosophy related to Krishna) is one such example of a new Avtar. Although the occurrence of a new Avtar may sound like the birth of a new religion, it is not really so. The new Avtar, involving or in the name of Saguna Brahman (e.g. Vishnu appearing in a new incarnation), basically brings changes in socio-religious beliefs as required by changing times and conditions. Moreover, the puranic text, dedicated to the new Avtar, still adheres to the essentials of Vedas and Vedic (Brahamanical) philosophies (Refs. 7, 8 and 9). In other worlds, the new Avtar (deity) remains true to basic religious and philosophical ideas of Hinduism, including the concept of monotheistic polymorphism in Hinduism (one God having many names and representations).

(2) It's not the original Vyasa (the author of the Mahabharata and the Bhagavad Gita) to whom these different Puranas are mistakenly accredited. There seem to be others who probably authored these Puranas, either using the name of original Vyasa or while even forming the lineage as Vyasa who was famous already as Mahabharata's author.

(3) There are only three genuine Vedas (Rig, Yajur and Sam), with Rig Veda as the most ancient and having the supremacy. All other texts in Hinduism are compared against these Vedas (Rig Veda essentially) for consideration as genuine religious texts. That is also the reason that Atharva Veda (being relatively new and as it violates Rig Veda on many important topics) is not considered a genuine Veda, in spite of the fact that Atharva Veda uses the name Veda in its name (after the name of ancient Vedic sage Atharvan). Thus, even though many people call Atharva Veda as the 4th Veda, that is mostly due to either ignorance or having a spurious interest in promoting unnecessary pujas / rituals and practice of magic etc.

To call or consider the Mahabharata (a post Vedic Epic) as the 5th (Pancham) Veda is similarly pointless, like calling the Atharva Veda as the 4th Veda.

» Manuvaadi or Manusmritya, if believing and following the Manusmriti?
by Seva Lamberdar Thu Jun 17, 2021 10:31 am

» Coronavirus vaccination: Rules to follow after getting vaccinated for COVID-19 (courtesy: TOI)
by Seva Lamberdar Tue May 04, 2021 8:57 am

» P.M. Modi's demonstration on doing any manual and menial task and treating everyone (irrespective of gender and caste) with dignity and respect
by Seva Lamberdar Fri Apr 23, 2021 5:48 am

» About stomach disorders including acidity, poor digestion and ulcers
by Seva Lamberdar Wed Apr 14, 2021 11:59 am

» Saving the Dead Sea (Nova documentary --- the need to keep population in check and safeguard environment and natural resources)
by Seva Lamberdar Sat Mar 27, 2021 7:15 am

» My COVID vaccine experience: "I had chills and felt feverish after the second dose of Moderna" (good read on vaccination)
by Seva Lamberdar Wed Mar 24, 2021 10:05 am

» The opposition to new agricultural laws, according to protesters
by Seva Lamberdar Tue Mar 02, 2021 7:21 am

» A few comments with respect to the Puranas (ancillary Hindu religious texts)
by Seva Lamberdar Wed Feb 24, 2021 10:19 am